James A. Schultz did not mean to be a Germanist. He meant to be an architect, an organ builder, or perhaps an organist. Once in college, however, Schultz misplaced architecture and discovered that others had greater musical gifts than he. So he majored in German. After college Schultz tried out both organ playing and organ building before realizing that he didn’t want to spend my life in church. He preferred universities. That’s when he applied to graduate school.

Professor Schultz’s commitment to the field really only began in graduate school at Princeton University, where he was drawn to the kind of rigorous, interdisciplinary, and imaginative medieval studies being pursued by Michael Curschmann. Easily distracted, Schultz was also drawn to Russian formalism and French structuralism, which led to a dissertation in the high structuralist mode and a Ph.D. in 1977. Much revised, the dissertation appeared as a book, The Shape of the Round Table: Structures of Middle High German Arthurian Romance, in 1983. Around this time he published a number of essays on medieval poetics, rhetoric, and narrative theory, on the medieval prologue, on narrative causality and coherence. These are issues that continue to engage him.

Schultz had graduated from Harvard College in 1969, at the height of the student and anti-war movements, and began teaching at Columbia University in 1977, a time when the promise of gay liberation still inspired, at least among my friends in New York, an exhilarating activism. In such an environment, he, like many others, felt the need for a scholarship more seriously engaged with history than the structuralism that had seemed so captivating. For me the work of Foucault provided an energizing model. These new interests turned what he originally conceived as a brief essay on the structure of Middle High German childhood narratives into a book on the history of childhood, The Knowledge of Childhood in the German Middle Ages, 1100-1350, which finally appeared in 1995. While working on this project he published related essays on the medieval family, medieval childhood and adolescence.

Four years at Columbia were followed by six at Yale before Professor Schultz moved to the University of Illinois at Chicago in 1987. At each station he counted among my close friends scholars of lesbian and gay history. Because Prof. Schultz had discussed their work with them for so long, he rashly thought he too knew something about the field, and in 1993 taught his first lesbian and gay studies course. Since coming to UCLA in 1995 Professor Schultz has devoted half his time to the Department of Germanic Languages and the other half to UCLA’s Lesbian, Gay, Bisexual, and Transgender Studies Program, of which he was the founding director. Recently his scholarly work has combined my medievalist interests with my interest in the study of sexuality. With two colleagues from Chicago Prof. Schultz edited a collection of essays, Constructing Medieval Sexuality, which was published in 1997. His most recent book, Courtly Love, the Love of Courtliness, and the History of Sexuality (2006), brings the kinds questions that have been asked by historians of sexuality to bear on one of the most contentious topics in medieval studies. 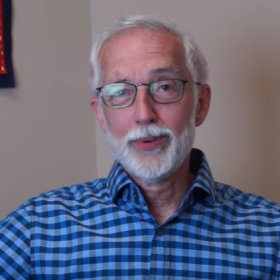