Collaborations include text for Dan Hurlin’s Disfarmer, which premiered at St. Ann’s Warehouse and Zoetrope, a music-theater work created with composer/director Alec Duffy designer Mimi Lien and developed through the Princeton Atelier. Awards include a Jerome Fellowship, a Six Points Fellowship, and the Dorothy B. Strelsin Playwriting Fellowship at Soho Rep.

Prior to teaching at the UCLA School of Theater, Film and Television, Oswald helmed the Playwriting/Screenwriting program at Purchase College/ SUNY and taught playwriting at Barnard, Mt. Holyoke, Princeton, and Eugene Lang College.

With Jordan Harrison he published four issues of Play A Journal of Plays. His micro-play, Little Thing, is forthcoming in The Best American Non-Required Reading 2014 and his writings about new plays have appeared in PAJ and The Brooklyn Rail.

Oswald is an affiliated artist at Clubbed Thumb and a resident playwright at New Dramatists. 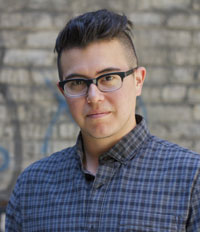